Today is National signing day and a great day for Cooper Neese and his family.  Cooper signed his National Letter of Intent to play Basketball for Butler in 2017 through 2021 at 2:34 PM.  Clover Nation is extremely proud of him and his efforts! 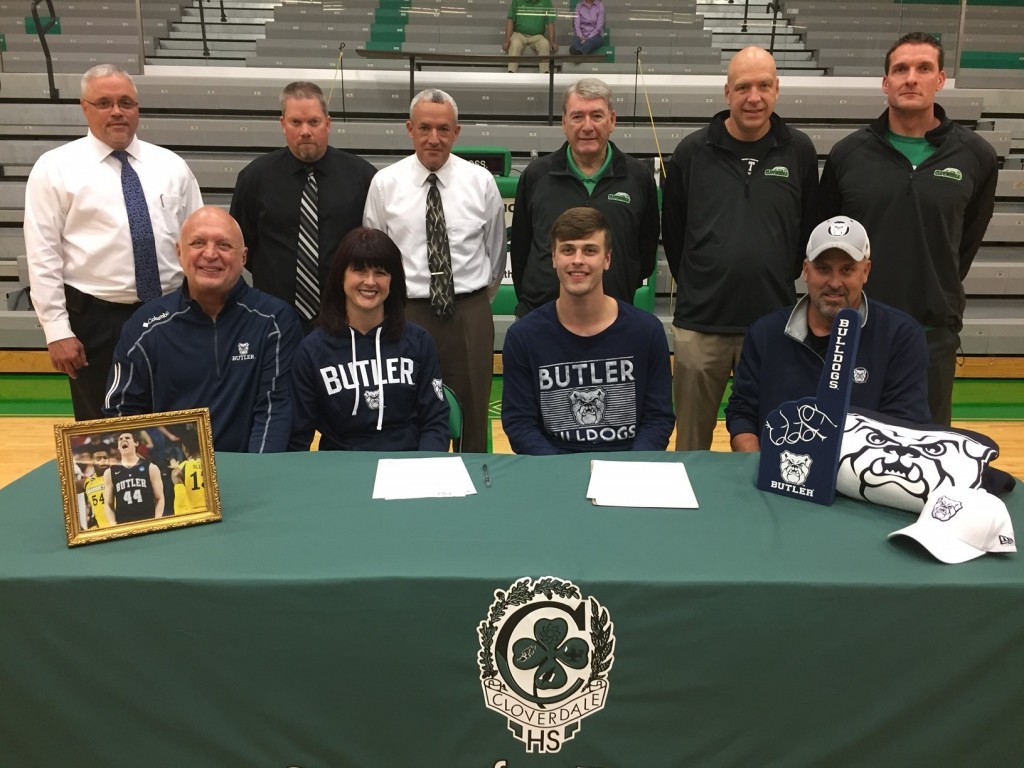 Cooper has already scored 1,678 points in his career and still has at least 25 games in his Senior year yet to play.  To give you an idea of where this puts him among other historic and esteemed players from Cloverdale and Putnam County, consider the following:

Cooper has scored with a year left to play, 340 points more than the late Chad Tucker, a 1983 Cloverdale Grad and Indiana All-Star who while here put 1,338 points on the board for the Clovers.  Of course, Chad went on to become a Butler Grad and while there Butler’s All-Time leading scorer with 2,321 points.  He was also a member of Butler’s All 1980’s Decade Team, a member of the 2008 Hall of Fame Silver Anniversary Team, and a 2013 Indiana Basketball Hall of Fame Inductee.

Neese has also scored, through his Junior year, 292 points more than 1968 Cloverdale Grad and Indiana All-Star, Rick Ford.  Rick went on to play at Indiana University and was a member of the 1993 Hall of Fame Silver Anniversary Team.

Cooper has outscored his dad, Jerry Neese, a 1983 Cloverdale Grad, by 419 points. Jerry went on to play 2 years at Vincennes and then transferred to finish his career at the University of Indianapolis.

Finally, Cooper is only 120 points behind Putnam County’s All-time leading scorer Jeff Blue, a 1960 Bainbridge Grad, an Indiana All-Star, and a 1965 Butler University Grad. Jeff was a member of Butler’s 1960’s All-Decade Team and a 1999 Indiana Basketball Hall of Fame Inductee.

Those that know Cooper would know he would probably not like such comparisons.  He is truly a humble athlete.  It should be noted here that not many (if any) athletes have played on Varsity as a Freshman like he has.  Today’s teams also play more games than teams did in the 60’s and 80’s but the fact remains, however, he is averaging 22.7 points per game through 74 games as a Clover (29.5 per game last year in 27 games).  With, at the very least, 25 games on the schedule, it is not a stretch to consider the fact that he could end up landing a spot among the Top 10 in Career Scoring of All-time in Indiana History. (He would need to get to 2,344 points to break into the Top 10).  We, as a school and community, have been blessed the last 3 years to have a player such as Cooper on and off the court.

Thank you Coop for representing your school and community in such a positive way and CONGRATULATIONS to you and your family!

No Events This Week

Events are added by athletic staff.
View All Events